Who Are the New Residents of Seattle?

Seattle is the fastest growing large city in the nation with an average of 1,000 new residents arriving every week. This has sparked endless conversation about the increased commute times and lack of housing affordability. What we haven’t discussed is how the values of new residents of Seattle compare to that of long-term residents. A recent survey set out to understand just that. They surveyed both new residents and long-term residents in order to better understand their values, motivations and how they are adapting to the city’s rapid changes.

Although new residents skew significantly younger, they do tend to share the same values as long-term residents when it comes to family, education, politics, and community. The environment is also deeply valued by all. Residents enjoy being surrounded by the region’s natural beauty and having access to outdoor activities. 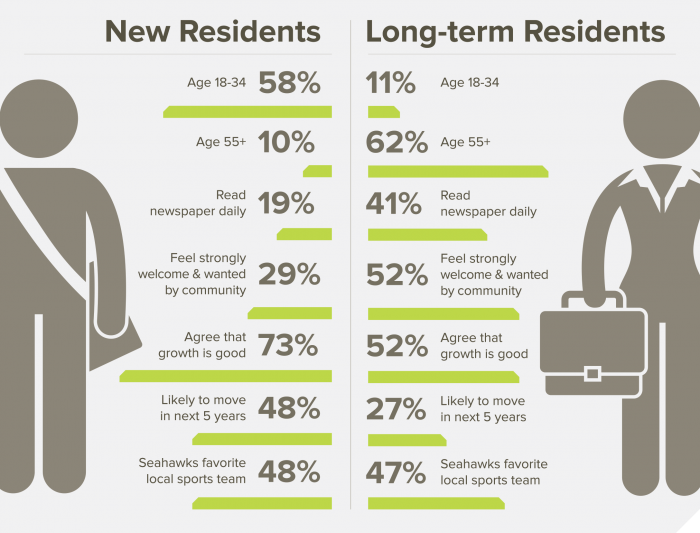 A big issue that both new and long-term residents agree on is transit. They believe that Seattle is behind in building a transit infrastructure to meet the needs of a “world class” metropolitan area. They equate quality of life with mobility in and out of the city. The East Link Light Rail extension will surely be a welcome addition come 2023. Once open passengers will be able to ride more than 42 miles from Bellevue in the east, Northgate in the north and Angle Lake in the south.

The challenge will be to figure out how to turn new residents into long-term residents. Nearly half of the new residents surveyed said that they are likely to move within the next five years. Local marketing and news will be important in order to increase the investments and commitments made by new residents to the area. In the end, the survey shows that both new and long-term residents really aren’t too different from one another.

Quinn Thomas even made a quiz! Do your values align more with new residents or long-term residents? Find out HERE!